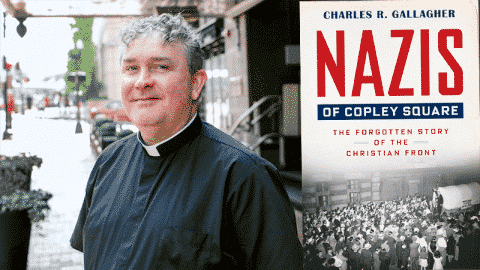 In Nazis of Copley Square, Charles Gallagher provides a crucial missing chapter in the history of the American far right. A forgotten history of American terrorists who, in the name of God, conspired to overthrow the government and formed an alliance with Hitler.

On January 13, 1940, FBI agents burst into the homes and offices of 17 members of the Christian Front, seizing guns, ammunition, and homemade bombs. J. Edgar Hoover charged the group with planning to incite a revolution and install a “temporary dictatorship” in order to stamp out Jewish and Communist influence in the United States. The men of the Christian Front imagined themselves as crusaders fighting for the spiritual purification of the nation, under assault from godless Communism, and they were hardly alone in their beliefs. The front traced its origins to vibrant global Catholic theological movements of the early twentieth century, such as the Mystical Body of Christ and Catholic Action.

Free admission. Father Gallagher’s book will be offered for sale and a book signing will follow his talk. PLEASE NOTE: The Atheneum requires all attendees to wear a mask.