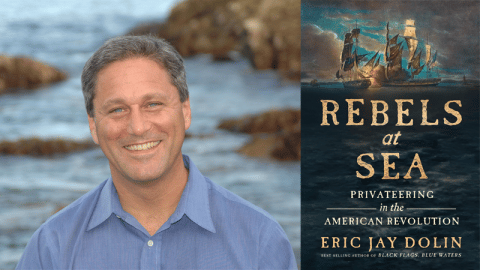 Eric Jay Dolin is the best-selling author of Black Flags, Blue Waters and in his newest work tells the story of the daring freelance sailors who proved essential to the winning of the Revolutionary War.

The heroic story of the founding of the U.S. Navy during the Revolution has been told before, yet most maritime histories don’t mention the ragtag fleet of private vessels –  from 20-foot whaleboats to 40-cannon men-of-war –  that truly revealed the new nation’s character―above all, its ambition and entrepreneurial ethos. In Rebels at Sea,  Dolin corrects that significant omission, and contends that privateers, though often seen as profiteers at best and pirates at worst, were in fact critical to the Revolution’s outcome. Abounding with tales of daring maneuvers and deadly encounters, Rebels at Sea presents the American Revolution as we have rarely seen.