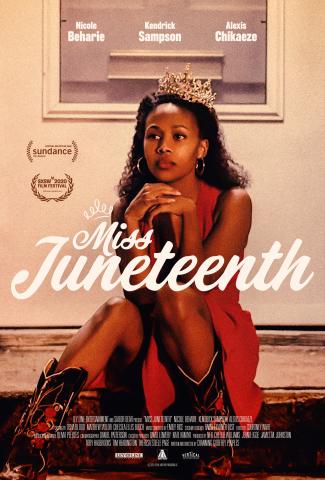 In celebration of Juneteenth, the Atheneum will be screening the award-winning film Miss Juneteenth directed by Channing Godfrey Peoples

Turquoise Jones (Nicole Beharie), is a single mother in a suburb of Fort Worth, Texas. She is the former winner of the local Miss Juneteenth pageant which offers full scholarship to a historically black college. She enters her 15-year-old daughter, Kai (Alexis Chikaeze) in the same pageant despite her daughter’s obvious lack of enthusiasm.

While other former Miss Juneteenth winners have gone on to have successful careers, Turquoise’s education was derailed by the birth of Kai, which forced her to drop out of college and for a time work as a stripper. To make ends meet she currently works at a bar and part time as a beautician at a mortuary where the owner is romantically interested in her. Kai struggles with her preparations for the Miss Juneteenth pageant, wanting to pursue dance instead.