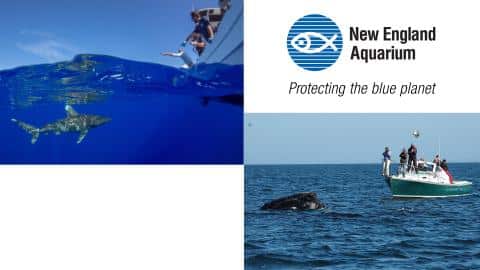 The ocean is essential to the health of our planet, and home to an incredibly diverse array of life. However, the ocean is also facing unprecedented challenges due to climate change and a rapidly increasing global ocean economy. Please join New England Aquarium President and CEO Vikki Spruill, Chief Scientist Dr. John Mandelman, and Senior Scientist Dr. Nick Whitney for a special interactive conversation and Q & A around the role the Aquarium and its partners are playing to safeguard ocean species, habitats and ecosystems in the face of these challenges. The Aquarium is a recognized global leader for its scientific research on sharks, sea turtles and the critically endangered North Atlantic right whale. The discussion will primarily focus on the sharks (of Nantucket waters), including but not limited to their importance to ocean health, species diversity, historical and present significance to mariners as well as residents of Nantucket, and how the Aquarium is studying the effects of different industries like offshore wind and fisheries on these animals in regional waters.

Vikki N. Spruill is President and CEO of the New England Aquarium, an ocean conservation organization that educates and inspires more than a million visitors a year on Boston’s Central Wharf; conducts applied research through its Anderson Cabot Center for Ocean Life; and rescues and rehabilitates threatened and endangered sea turtles in its Sea Turtle Hospital in Quincy, Mass.

Ms. Spruill previously served as President and CEO of the Council on Foundations, the largest association of philanthropic grant-making organizations, and Ocean Conservancy, a science-based advocacy organization dedicated to the oceans. She also founded the Trash Free Seas Alliance, was the founding director of SeaWeb, and helped found COMPASS, which empowers scientists to better engage in public discourse on environmental issues.

Ms. Spruill is on the Board of Directors of the Greater Boston Chamber of Commerce, the Harwood Institute, and the Water Institute of the Gulf. She is a Trustee of the New England Aquarium and an active member of Boston’s Green Ribbon Commission and the Massachusetts Women’s Forum. She also serves as Co-chair of the Greater Boston Chamber of Commerce Climate & Energy Leadership Council.

Dr. John Mandelman is the Vice President and Chief Scientist of the Anderson Cabot Center, which encompasses all the Institution’s solutions-driven scientific research, engagement, and conservation work. Dr. Mandelman has resided at the Aquarium in various capacities since 2001, while concurrently completing his doctoral work in Biology at Northeastern University in 2006. In collaboration with various colleagues around the globe, his research focuses on the physiological ecology and conservation physiology of marine fishes, with a specific focus on better understanding and mitigating the lethal and sublethal effects of human-induced disturbances on vulnerable and/or socioeconomically important species, particularly in the Gulf of Maine. All his work aims to generate best-practice mitigation strategies that directly aid or inform fisheries management processes and policies. In addition to his primary role at the New England Aquarium, Dr. Mandelman is Research Faculty at the University of Massachusetts Boston. There he advises several graduate students as part of the UMass Intercampus Marine Program and teaches courses in general ichthyology as well as the physiological ecology and conservation of fishes.

Dr. Nick Whitney is a Senior Scientist and Chair of the Fisheries Science and Emerging Technologies Program at the Anderson Cabot Center. Nick’s work focuses on the use of cutting-edge technology to answer important questions for species conservation and responsible management of natural resources.

Nick’s most recent work has focused on the use of accelerometers, the same technology found in smartphones, Fitbits®, and other modern electrics to study the fine-scale behavior of sharks in the wild. He and his team have used this technology to study shark mating behavior and energy expenditure, and to determine whether and how sharks survive the stress of being caught and released by fishermen. Nick’s accelerometer work has expanded to other animals, including several species of sea turtles, fishes, and pythons.