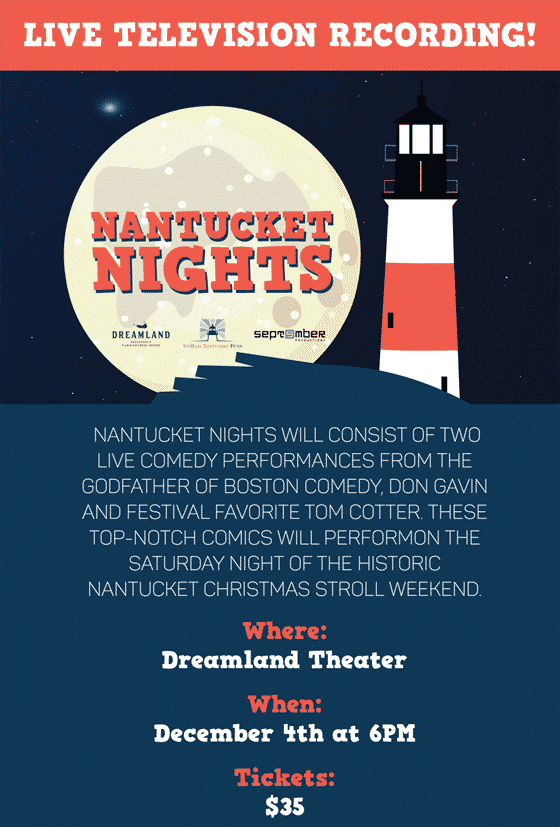 This year’s featured performers are none other than The Godfather of Boston Comedy, Don Gavin, and America’s Got Talent’s top comedic finisher, Tom Cotter. The event will be recorded for television and streaming services in front of an enthusiastic crowd to help celebrate the energy of the island at its off season best.

The two specials will display the beauty of wintertime on Nantucket; wintry cobblestone streets lined with Christmas trees and the hustle and bustle of Christmas shoppers, revelers, theater patrons and performers as they make their way through our picturesque town.

Nantucket Island is known the world over for its amazing beaches and beautiful vibrant downtown during the summer season. But many people do not realize the amazing beauty to be found on the island in the “off season.” The “off season” has been traditionally relegated to the locals…until now.

Professionally recorded with all island-based resources (Dan Driscoll and September Films, NCTV, and technical crew) for television or streaming services, like Showtime, Amazon Prime, Netflix or similar, the entire world can see what locals have known for years: Nantucket Island is truly a special place to spend the holidays.

Executive Director of the Nantucket Comedy Festival and Nantucket Nights Producer Kevin Flynn says, “Our goal is to make Nantucket Nights to comedy, what Austin City Limits is to music. Austin City Limits invites great musical artists to its stages a few times a year, but the real star of the show is the city itself. We hope to put our very own island spin on the event to showcase the REAL star:
Nantucket.”

Thanks to the support of the ReMain Nantucket Fund, tickets for Nantucket Nights will be priced at the low rate of $35 to make the show very accessible and will go on sale the first week in November.

Information and updates can be found at www.nantucketcomedy.com.